Île des Pins is an island located to the South of the mainland and is part of the South Province. It is about a 20-minute flight from Magenta Airport in Nouméa. The island was the site where political deportees were sent both from France but also the Kabyle rebels. As the commune located the furthest away from Paris, the exile of the communards to Ile des Pins after 1871 bears enormous symbolic as well as geographical weight. Rélégués (recidivists sent to the penal colony) were subsequently sent to the island between 1887 and 1910. The island became an indigenous reserve once more in 1913. 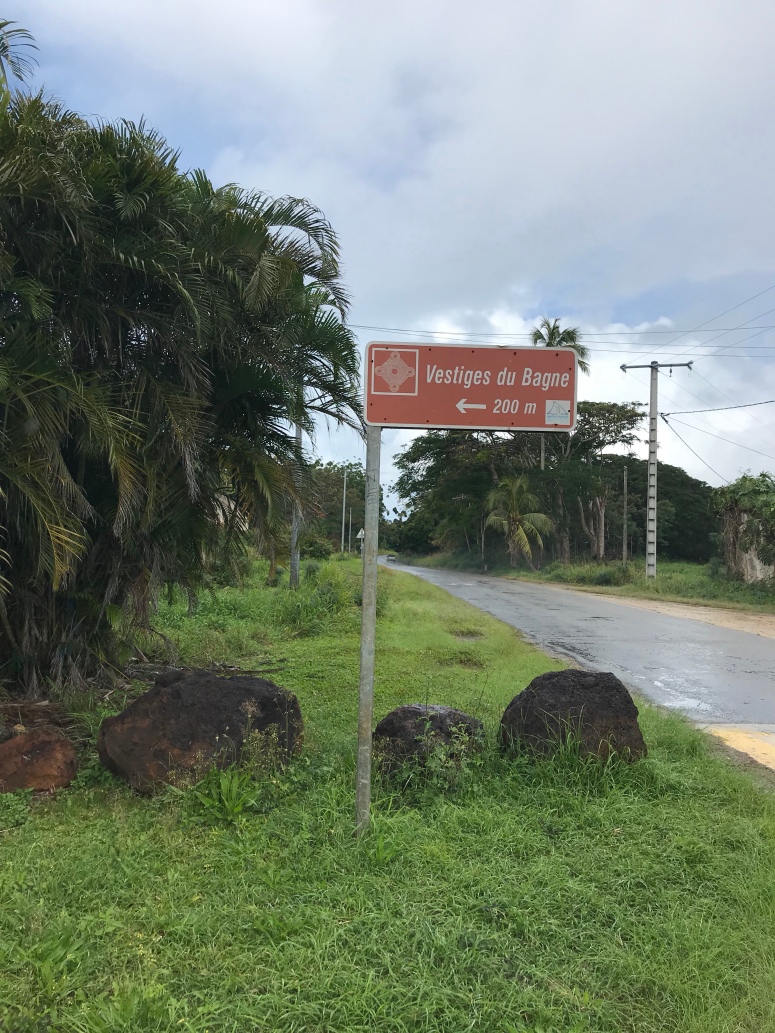 Today there are a number of vestiges associated with the bagne. We were grateful for the blog Un jour en Calédonie which provided a fair amount of useful information on where to find various ruins on the island. Most notably there are those found in Ouro, the restored doctor’s house and gendarmerie on the Baie de Kuto and also the neat and carefully maintained Cimetière des Déportés near Ouro. Some of the ruins at Ouro are located on private land and you have to ask permission from the épicerie built within the old walls of the ruins.

During our visit we focused our attention on the ruins across the road from the épicerie and in particular on those contained by a large perimeter wall. This was partly due to the odd opening hours of the épicerie and partly due to intermittent rain. Although there is a brown heritage sign indicating the vestiges, there are no panels here (details about the sites were found at the Itinéraire Bagne panel located at the Baie de Kuto). This means there is a certain amount of guesswork as to the original function of the buildings. On entering the interior of the walled space, we found 4 brick buildings. Two seemed to have held dormitories and it was still possible to see hooks for hammocks on the walls. Two were slightly smaller buildings containing 10 individual cells. This suggests (prior to checking on any plans) that the site was a quartier de réclusion as the cell system was only really used in the bagne as a form of punishment. In a recent guide, it suggests that this was the ‘prison’ for rélégués at Ouro, a closed space distinct to other sites such as the ateliers and hospital.

Exploring the site, the vegetation made it easy to become disorientated. We both decided it might be easier to get a clearer understanding of the space by creating mini maps or plans of the layout. There is something exciting about how ruins allow one to get lost and disorientated whilst speculating on the stories of the space. There is a greater sense of freedom perhaps than at a site which has been carefully restored and heavily signposted. Ruins offer the possibility of exploration even if what we discover is limited to a very personal engagement with a space. It is an engagement that relies heavily on the tactile, touching walls, negotiating brambles and nettles.

The attempt to come up with a map of the space was an attempt to move beyond this tactile experience and to produce an understanding of the layout that wouldn’t easily be transmitted by a series of photos. I also wanted to experiment with diy methods of getting the scale right.

My first attempt freestyle had to be scribbled over and redrawn, showing the inadequacies of my ability to think spatially. So I decided to note down the distances between key points as well as the dimensions of each building using my stride as a measure. The next day I redrew the map using the strides as a very rough guide. The result is neater but I feel more attached to the original draft sketch with all its scribbles. Still as I was to find out…I was still way out.

Claire’s map, as will become apparent, is more accurate. The reference to ‘shit building’ is because she stumbled (almost) across some human excrement in one of the cells there. She has opted to denote the bull as a vortex.

After drawing our own plans, we came across a bird’s eye view photo of the site taken from one of the nearby hills. It is clear the original or earlier organisation of the buildings and walls was different and had undergone some significant developments to constitute the layout we encountered. For example, in one photo I’ve seen there was a small hut or ‘kiosk’ located in the centre of the space which has now completely disappeared. Today I came across an aerial view from 2000 featured in a short guide produced in 2014. The vegetation at that point has been completely cleared from around the buildings although they all seem to have trees growing inside. This is the reverse to the current state of the ruins which also suggests that the roofs have been replaced on all except one building in the inner compound. The photo makes the symmetry of the buildings much clearer. The positioning of the two cell buildings at diagonals is something that was obscured by the vegetation and the wiggly paths leading to each building. SF (& CR)