En route to New Caledonia for the next phase of site visits, I spent a couple of days in Sydney where I managed to visit both Cockatoo Island and Hyde Park Barracks. Built between 1817 and 1819 and designed by convict-architect Francis Greenway, around 50,000 convicts were thought to have passed through the barracks during the operation of the penal colony. Between 1848 and 1887, the building was used the Female Immigration Depot and subsequently by local government and the courts until the end of the 1970s.

Since 2010, the museum has been part of the UNESCO world heritage convict sites which incorporate 11 sites including Cockatoo Island. The history of the site as museum is far longer, dating from the end of the 1970s. Embedded in the museum is the presentation of its evolution to museum including reference at various to the politics of preservation and presentation at stake. In this respect, it seems to offer a model of ‘best practice’ for convict history as well as self-reflexivity in terms of the political and social function of a ‘museum’. As one panel informs visitors:

‘Everything you see is part of the history of this place. From the limewashed walls of the original convict dormitory to the galvanised iron duct to aircondition the modern museum. From the lowly rat who saved many possessions to the lofty wig that donned the judge in session.’

One of the core narratives running through the museum and especially in the room which reconstructs life for the immigrant women housed there between 1848 and 1887, is the role of archaeology in elucidating the everyday life of the site. This is not just taken for granted in the display of excavated objects. As well as a large exhibition focused on the excavation work and the objects found, individual objects and sets of objects are displayed within the women’s dormitory but framed with explanations as to what each object might tell us about various aspects of life at the Barracks. Nit combs found under the floorboards of the dormitories, for example, are used as evidence of both unsanitary conditions and attempts on the part of the women staying there to maintain hygiene. Seeds also found in the floorboards suggest eating in the dormitories as well as the mess but also give indications of a more varied diet than official records might suggest. 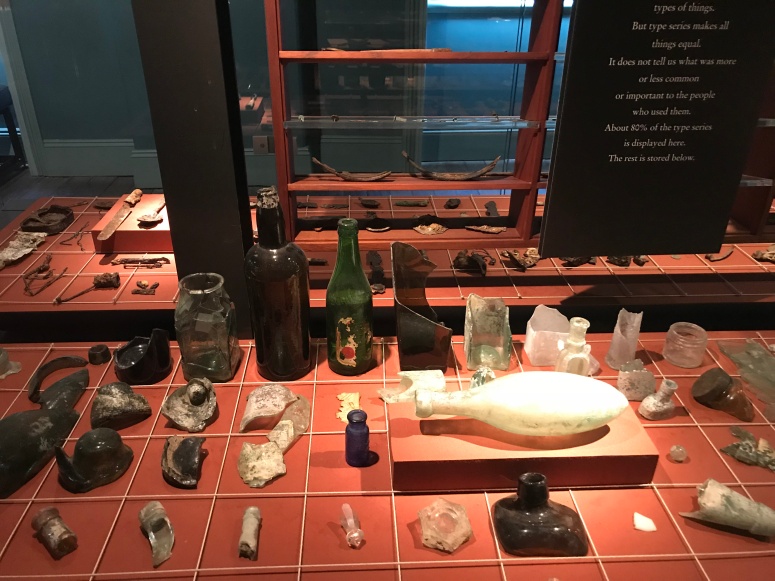 Downstairs in the museum but also at points throughout such as the stairwells, there is a concerted attempt to show different layers of history through the stripping away of paintwork and plaster. Interestingly, the extensive archaeological excavations taking place in the 1980s which yielded over 85,000 different items and fragments were only possible as a result of extensive renovations being carried out some of which might now be seen as working counter to preservation and conservation initiatives. I find this particularly interesting as a point of comparison with different sites in French Guiana related to the Administration Pénitentiaire where archaeological excavations have been very limited either due to lack of recognition or the fragility of remaining structures.

The museum refers on several occasions to notion of ‘use and abuse’ that defined the convict system. This is perhaps one of most direct critiques I have ever seen in a prison museum that wasn’t a former site of political detention. But it is unclear how we should understand ‘use’ here. Does this imply a utopian ideal that was corrupted yet ultimately redeemed by the ‘successful’ colonial development built off the back of the convict system? Should we read it as critical of the idea of individuals as a means to an end, bodies as unpaid labour? Or does use refer to ‘useful’ here?

Elsewhere there is a more clear agenda set out as to the purpose of the museum within wider political/social agenda. There is a brief reference to the need to draw on history to understand contemporary context yet the space offers no real possibility for this except via the idea of valorisation convict contribution towards colonial development and removing the shame of this past for descendants of convicts. I found myself asking various questions about this: What about contemporary forms of detention? Immigration? What about the lack of options presented to those claiming refugee status? The ongoing use of islands as sites of incarceration and detention? Nauru? (see, for example, the recent Guardian opinion piece on this) Despite its larger claims, there is a limit to the self-reflexivity of the site in this respect.

In addition to the physical objects, historical maps and paintings and reconstructions of the living spaces, the museum has also commissioned artists to produce different interpretations of the convicts themselves. In one of the upstairs room, the space features a series of convict ‘shadows’, black life-sized cut outs with the stories of each convict represented etched onto their torsos. The same room features a ‘soundscape’ based on archival material reproduced as spoken word, noises associated with the space but also silences. The use of soundscapes at prison museums is a growing phenomenon. This one which shifted between different speakers in the room was quite hard to make out particularly when other visitors came into the room with their personal audioguides blaring. 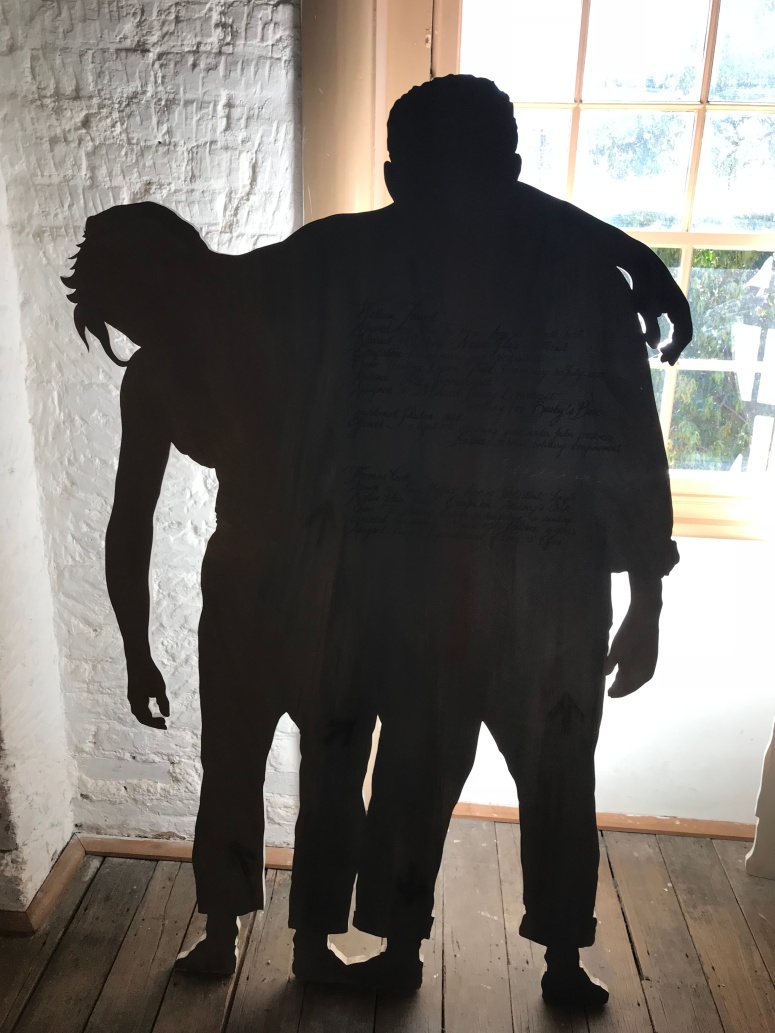 One of the most enduring images of the Barracks was, for me, a photograph entitled ‘Flogged Back’ which was commissioned by the Historic Houses Trust NSW but is undated and has no information of the photographer. Underneath the photograph are a series of accounts of floggings given out to different convicts for various infractions. The visual presentation of direct, premeditated violence meted out by the penal authorities rather than the usual accounts of suffering produced through labour and deprivation is unusual both here and elsewhere. There is something both Christ-like and eroticised about this image. Although it is unlike anything else presented in the museum, it also highlights the redemptive discourse of convict labour once presented by the penal system itself and now reproduced by the museum in its affirmation of the role of convicts in the development of present-day Australia. 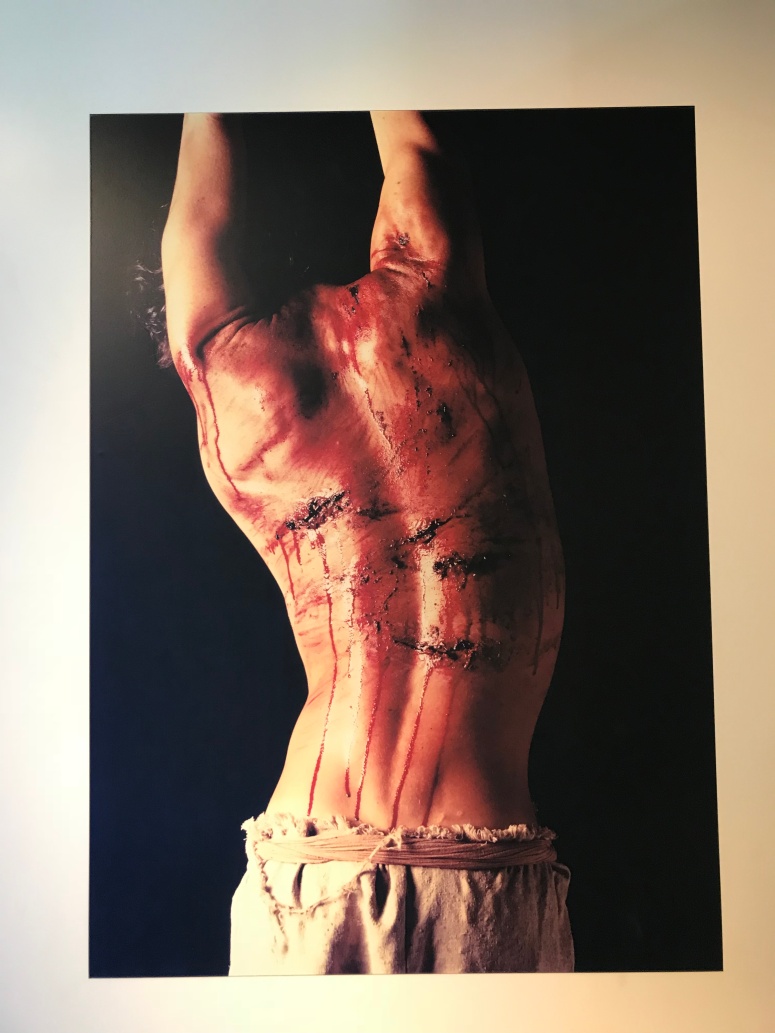