At the far corner of French Guiana, meaning the north west, on the estuary of the River Maroni, can be found some small remains of the bagne, a site that was known as Les Hattes. The present life of this part of French Guiana is organised under the name of the village of Yalimapo, and the vestiges of the bagne didn’t feel very prominent to me.

The village is at the end of the road, there being no bridge across the River Maroni into neighbouring Suriname – not that you would expect to find one here where the mouth of the estuary is roughly 4 km wide. Interestingly Apple maps map view indicates a land connection across the mouth of the river, while its satellite map view does not indicate this fictional structure or landform. 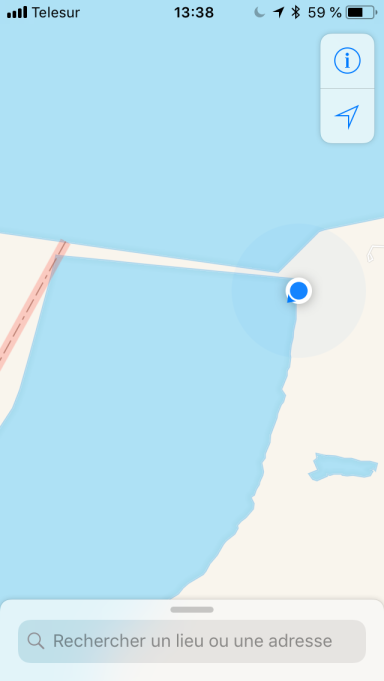 My Google searches for the term ‘Les Hattes’ bring up, for the most part, results connected with tourism in the area, especially TripAdvisor, and tide forecasts, while the image search results mostly focus on turtles laying their eggs along the shore. Tucked in among these offerings is one of the postcard images I’ve seen reproduced in a number of places:

No signposts direct the tourist to the remains of the old jetty, which we discovered by means of following the well-established path running alongside the beach, so richly green and giving a partial view of the brown sea and threatening sky that in translating the view into a digital photograph I had the impression that visually it rather resembled the English countryside. The information signs related to the behaviours of the turtles, and rules relating to their safeguarding, but no mention that the jetty of the former penal colony establishment lay just a little further around to the left. I noticed a brick in the sand, and knowing bricks to be one of the signature remnant-objects of the bagne, with each establishment generally having its own briquetterie (brickyard), I immediately wanted to see if it had any remaining inscription of ‘AP’ for Administration Penitentiaire, or ‘Les Hattes’. It proved to be the first in a long line of brick discoveries, leading us to wade further along the beach, to find two sets of rotting wooden supports for the former jetty that used to occupy this place.

I have since been able to confirm the location of the jetty with reference to archival maps of Les Hattes held in the Archives National d’Outre Mer, but have yet to secure an image of this map that I can reproduce.

Les Hattes was once an integral part of the telegraph system that ran along the coastline of French Guyana, connecting Cayenne in the south east with Les Hattes before turning upriver to St Laurent du Maroni and its subsidiary camps. The corner of the territory was, previously, a crucial link in this chain of communication, and I understand the camp also had responsibility for monitoring the mouth of the river. In the present, it appears to my tourist/researcher gaze as a corner that has since been ‘cut off’ and is now part of a nature reserve. The remains of the jetty attest to an extent of the former settlement that it is now difficult to picture from the position of the shoreline.

I left a temporary ‘drawing’ on the shore, taking up the gluier finer grey mud (a good texture for spreading) and adding it to one surface of a former-jetty stone. Obviously this is something of a nod to Andy Goldsworthy’s work, but mostly an attempt to take up materials that are to hand at a site of bagne vestiges and to try to make something of it that can be both material and rendered in a digital photograph.

My interest in the material is a lot to do with the idea of the extensive material existence of the bagne as a longstanding institution that produced a huge amount of infrastructure, buildings, roads, jetties/pontoons, railways that embodied (and continue to embody, where they continue to exist or their subsequent forms continue, eg. where the road has been constructed on top of the previously existing railway line between St Laurent and Mana) imprisoned persons’ labour, but also the idea of the institution attempting to reduce people to their material being via bodily suffering, and this materiality being paramount in how we can think about depicting both this history and its implications and possibilities for the future. For now, the shoreline at Yalimapo continues quietly as the broken up AP bricks erode slowly on the beach. Questions from here include:

– how does one work against fetishizing the AP bricks because they are findable objects and easily photographable?

– can one use visual methods to pursue the recognition that every brick – as well as infrastructure – was created through the bodily labour of bagnards and that to some extent their labour is what is being abraded through the processes of natural erosion?