Having been disappointed several times in our search for ruins over the past week or so, we didn’t expect to find anything beyond a trail. As it turned out there are also vestiges from one of the camps annexed to Prony. The ruins are well signposted from the road and also have their own Itinéraire Bagne panel. There are three main buildings still intact on the primary site which also includes parts of the perimeter wall.Slightly north of the main site of the vestiges, there seems to be a family living in a building that was once perhaps the Maison du chef. The ruins have been cleared and made as safe as possible but in a way that gives the appearance of casual abandonment.

The main vegetation in two of the buildings consists of smaller weeds including tiny delicate pink and purple flowers (am yet to identify) something also present at Ile des Pins but here it is clear that larger more structurally damaging plants and trees have been discouraged. This creates a different and perhaps calmer sense of nature reclaiming the site than more dramatic examples found on Ile Saint Joseph, Prony village and Ile des Pins. Of course both are cultivated and carefully maintained.

What comes into focus as a result are the large window and door frames further enlarged by the erosion of the brick work around them. They are reminiscent of the frames found especially in Rodolphe Hammadi’s photos of the vestiges of the bagne in French Guiana but there is something less sinister, less disturbing about the structures and their ruination. There is a gentle breeze and birds are singing. In the distance a small child is whining at his parents.

I’ve tried to think about why this. Perhaps it is the climate. Perhaps the more visible signs of maintenance and clearance of vegetation. The buildings in their arrested decay seem to exhibit a care for the past. The erosion doesn’t so much imply disrepair but allows you to see how the buildings were constructed. The foundations are also visible giving a more complete sense of the building process. The buildings have been carefully presented here in order to demonstrate pride in the convict labour that built them rather than shame in the system that demanded convicts to build their own accommodation along with the administrative buildings that would serve in the management and determination of their longterm fates.

Attached to one of the former buildings is a small more recently built extension. This also makes me think of the Chamoiseau-Hammadi project. Chamoiseau dismisses the squat that was still there when he visited or had recently been evicted to make way for restorations and preservation. His preference seems to have been for a presentation of the bagne as an abandoned site bearing near imperceptible traces of the lives that once inhabited and encountered it. Here at Port Boisé it is clear someone was living or working there quite recently. The door has a number as if mail was delivered there. Perhaps it was a squat or a caretaker’s accommodation. It is odd to see it continue to exist after the conservation initiatives have been put in place rather than erased and forgotten. SF 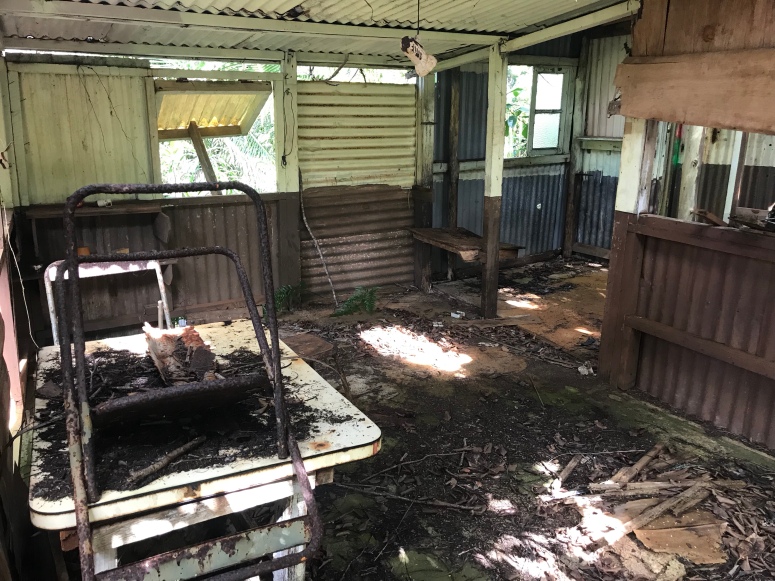